Illuminating the Middle Ages: The Art of the Book from the Monastery of Lindisfarne to the Court of Burgundy 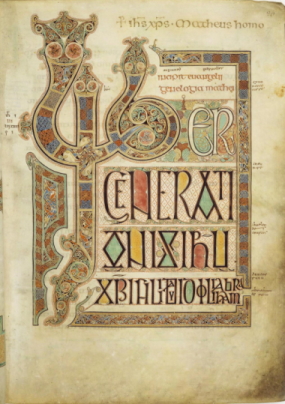 Medieval illuminated manuscripts represent one of the greatest monuments of Western culture.  They are not only art works of exquisite beauty, but also records of thought, belief and daily life that can still touch us today many centuries after their creation.   In each of the talks in this series, Prof. Brian Black will concentrate on an important illuminated manuscript, discussing its historical background and cultural context.

Together, we will then leaf through a digital copy of the book from one of the major European and North American library sites, looking at how the manuscript is constructed, the meaning and significance of its illuminations and its reflections of the life and thought of its era.  The talks will also touch on other arts of the period, such as music, stained glass work and painting.

The series begins with Irish monasticism and the reconversion of the British Isles in the seventh to eighth centuries, culminating in the Lindisfarne Gospels with its intricate, jewel-like illuminations.  Other talks will include the even more intricate Book of Kells, golden psalters and mass books of the Carolingian Renaissance, Paris and the pocket bible of the twelfth and thirteenth centuries, and the sumptuous manuscripts of the courts of Burgundy and France in the fourteenth and fifteenth centuries.  All of the talks will be held on Friday evenings from 7:00-9:00.  Please see the schedule below:

Friday, January 29: The Book of Lindisfarne and the Reconversion of England

Friday, February 12: “Made by Angels”: The Book of Kells

Friday, February 26:  The Carolingian Renaissance and its Imperial Books of Gold

Friday, March 26:  The Paris of Saint Louis and the Parisian Pocket Bible

Friday, April 30: The Disastrous Fourteenth Century and the Rivalry of the Courts of Burgundy and France

If you are interested and would like to spend some time enjoying the bright magic of illuminated manuscripts in these dark times, please contact Brian at brian.black@uleth.ca