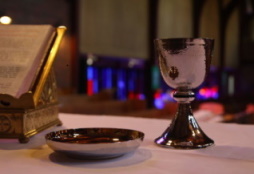 If you want to know what Anglicans believe, you have to come and worship with us. Unlike many churches, the Anglican Church does not produce formal statements of doctrine. Instead our faith is expressed through the forms of worship in our prayer books. Anglicans hold dear the ancient latin motto “Lex orandi, lex credendi”, “the language of prayer is the language of belief.” Thus, when someone proposes a change in Anglican theology, the debate is usually proposed as a change in an existing service of worship, or as a new service altogether.

The Anglican church of Canada recognizes two books of worship: the Book of Common Prayer (the BCP, dating from 1662) and the Book of Alternative Services (the BAS, dating from 1975). We also use a Book of Occasional Services to address pastoral needs that occur less frequently.

St. Augustine’s, in common with all churches of the Anglican Communion, holds to the Apostles’ Creed and the Nicene Creed as expressing the irreducible basics of Christian belief — what C.S. Lewis called “mere Christianity.” Historically, the ancient baptismal creed of the Church, the Apostles’ Creed, has been used to describe the basic doctrinal beliefs common to all Christians.  This Creed goes back to the ancient and undivided Church and is a great summary of the basics of the Christian faith:

I believe in God,
The Father almighty,
Creator of heaven and earth.

I believe in Jesus Christ, his only Son, our Lord.
He was conceived by the power of the Holy Spirit
And born of the Virgin Mary.
He suffered under Pontius Pilate,
Was crucified, died, and was buried.
He descended to the dead.
On the third day he rose again.
He ascended into heaven,
And is seated at the right hand of the Father.
He will come again
To judge the living and the dead.

I believe in the Holy Spirit,
The holy catholic Church,
The communion of saints,
The forgiveness of sins,
The resurrection of the body,
And the life everlasting.  Amen.

If you wonder what this creed might look like as it is lived at St. Augustine’s, you can consider also our Parish Mission Statement, which describes who we are, and what we believe:

We are a people transformed into a family by the grace of our Father in heaven, revealed to us in His Son Jesus Christ.

Our life together is marked by a Trinitarian faith, grounded in the ancient pattern of Word and Sacrament, yet reaching out to the world around us, with concern and creativity, through the power of the Holy Spirit.

An even more concise description of our community is expressed in our parish motto: A church family in the heart of the city.